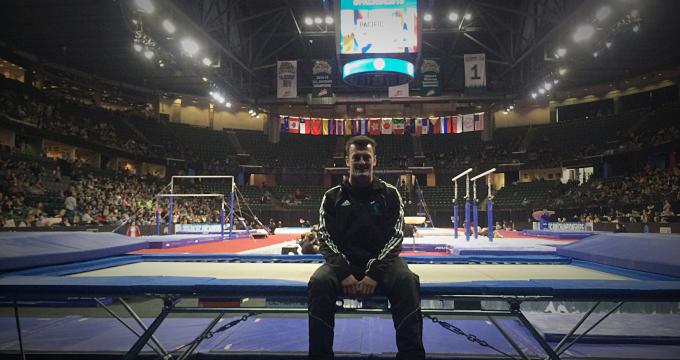 One of New Zealand's top trampoline athletes, Jared Cooper, has come back from international competition determined to qualify for the 2020 Olympics in Tokyo.

Jared recently returned from the Pacific Rim Gymnastics Championships held in Everett, Washington, in the United States, where he represented New Zealand in the senior men's trampoline event. His participation in the competition was proudly supported by OrbitProtect.

Jared, who is currently the third ranked senior men's trampolinist in New Zealand, was placed eleventh in his competition event.

"I'm really happy with where I was placed. I hit all the scores that I was aiming for and that I'd been hitting in New Zealand so I came away with a result that is really good for me."

He says 16 competitors from eight Pacific Rim countries took part in his event and each one was "a high class athlete". Six of the people he was competing against will be taking part in the 2016 Rio Olympics, including his teammate Dylan Schmidt, who will be the first New Zealand trampolinist to compete at an Olympics.

"I've come away from the competition determined to make the Olympics because I've seen that it's possible. I now know what it's going to take to get there and I have four years to work hard, train smarter and focus on that goal. I'm really looking forward to getting into it."

Jared, who has been trampolining for 14 years, says his focus is now on preparing for the 2016 New Zealand Gymsports Championships being held in Invercargill in late September, followed by the 2016 Indo Pacific Trampoline and Tumbling Championships in Napier in late October.

He says his goal is to make it to the Trampoline World Championships next year to see how close he is to qualifying for the 2020 Olympics.

"That will help me get a sense of what I need to do to qualify in 2019. I have a deadline now and a new sense of urgency to be ready by the start of 2019 by achieving good competition results over the next three years."

The team at Orbit Protect wishes Jared all the best for his upcoming competitions and will be avidly following his path to the 2020 Olympics.